Headed to the Mō'ili'ili Summer Fest?

Here are your parking options…

Note: Coyne Street will be closed for the event. 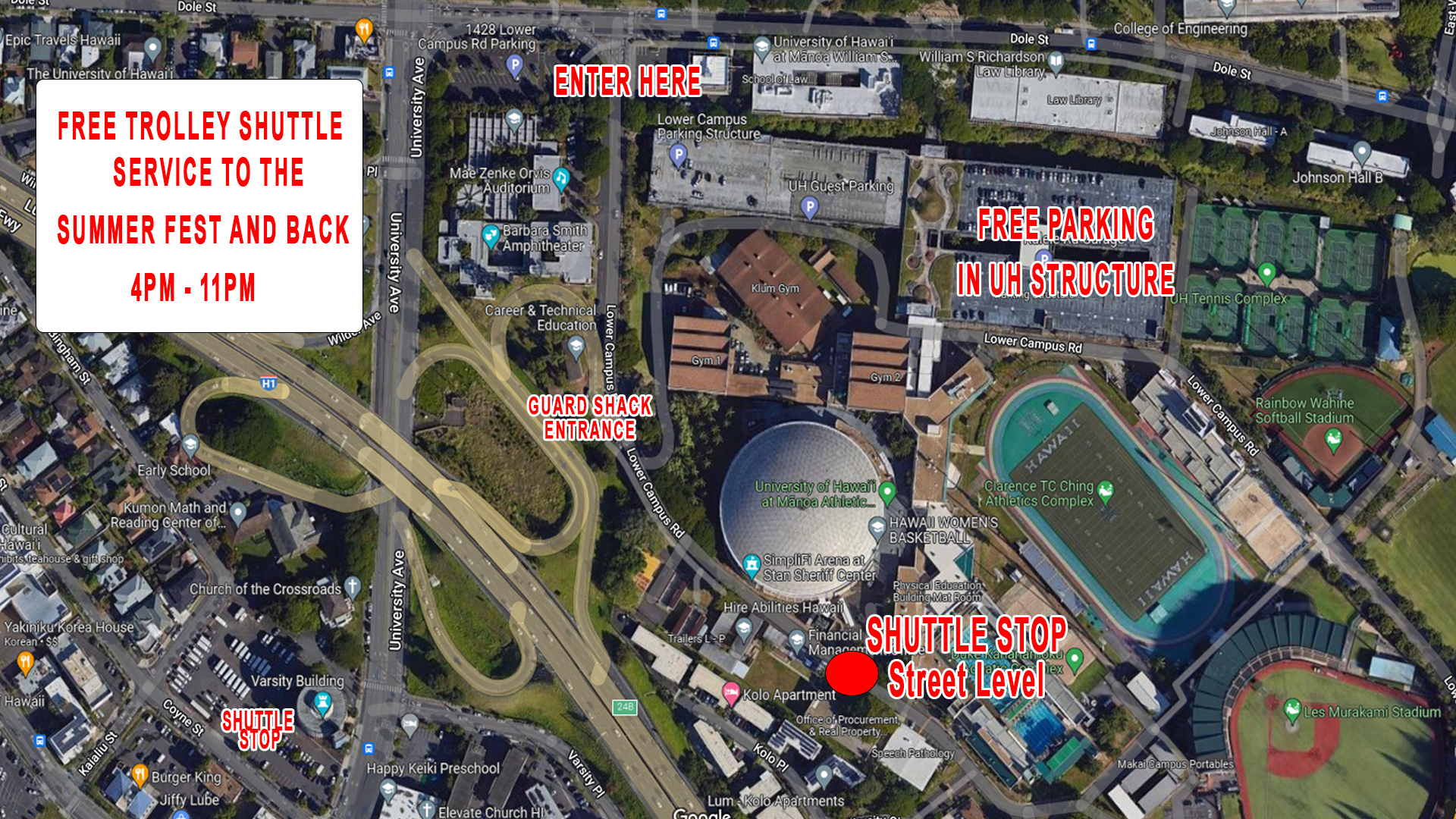 The annual celebration returns after a two-year hiatus

(Honolulu, HI) – Organizers of the Mō’ili’ili Summer Fest have scheduled the annual Obon season celebration to return on Saturday, July 2, 2022. After a two-year hiatus due to the coronavirus pandemic, the Summer Fest will celebrate historic Mō’ili’ili with Honolulu’s largest Bon Dance and modern street festival on Coyne Street and the former Varsity Theatre parking lot from 5:00 p.m. to 10:00 p.m.

Coyne Street between University Avenue and Kaialiu Street will be closed for the event and feature food vendors and comfort areas. Food vendors and retailers who are interested in participating may email may moiliili.events@gmail.com.

The event provides the opportunity to learn more about the Tanabata holiday on the 7th day of the 7th month, decorate a round Japanese fan called Uchiwa for using during the night, write a wish on a paper and suspend it on a bamboo tree from the Japanese Cultural Center. The Mōʻiliʻili Community Center also exhibits historical pictures of Mōʻiliʻili’s Hawaiian, Japanese-American, and Hawaiian-Chinese inhabitants.

The Bon dance, also known as Bon Odori, is a Japanese style of folk dance performed during the Obon season. The Bon dance tradition has a history of almost six hundred years and is said to have begun towards the end of the Muromachi era as a type of public entertainment. Bon Odori starts with the tale of a disciple of the Budha called Maha Maudgalyayana (Mokuren), who used his superhuman abilities to look upon his dead mother only to discover that she had plunged into the world of Hungry Ghosts and was in a lot of pain. Much disturbed, he sought the Buddha to find out how he could free his mother from this world. Buddha directed him to make sacrifices to the several Buddhist monks who had just finished a summer vacation on the 15th day of the 7th month. Maha Maudgalyayana followed the Buddha’s instructions and was successful in freeing his mother. He also started to understand the true essence of the selfless sacrifices his mother had made for him throughout his life. His mother’s release from suffering and the kindness she had shown him throughout his life made him so happy that he started to dance with joy. It is from Mokuren’s dance that the name Bon dance is derived. In essence, the Bon Odori is a dance to remember and appreciate one’s ancestors and the sacrifices they made. Over the years, the original spiritual purpose has somewhat faded, and the dance is presently associated with summer.

Traditionally a Nenbutsu folk dance to embrace the spirit of the dead, the music and technique employed now differ in many aspects across regions. The music can be songs related to the spiritual communication of Obon, or local Minyo folk songs. As a result, the Bon dance will appear different depending on the region it is being performed. In a typical Bon dance, people line up in a circle around a large wooden scaffold known as a yagura. The yagura also acts as the bandstand for the singers of the performance. Some dances move clockwise, while others move counter-clockwise around the yagura. In some dances, people reverse when dancing, but most dances do not incorporate this aspect. Sometimes people move forward and backward while facing the yagura. In other dances such as the Tokushima Awa Odori and Kagoshima Ohara dance, the dancers move in a straight line in the streets of the town. Other ways in which the Bon dance can vary involves the incorporation of different types of fans, towels, and wooden clappers during the dance. The music played during the dance is not restricted to Minyo and Obon songs, children tunes tailored to the beat of the ondo, and modern enka hits are sometimes incorporated into the dance.

The dance spread to Hawaii through plantation workers who had immigrated from Japan. Presently the dance is held at Buddhist missions, Shintoist missions, and in shopping centers in Hawaii. In some Buddhist missions, the family members of the deceased burn incense as a way of remembrance before taking part in the Bon dance. Other than that, the festival is non-religious. The Participants, mostly of Japanese descent and people from different races, dance around the yagura in a circle. Recordings are played on the yagura, and the taiko group plays drums to accompany the songs. The songs performed vary among the regions and may include both Japanese traditional Bon Odori tunes as well as modern songs.